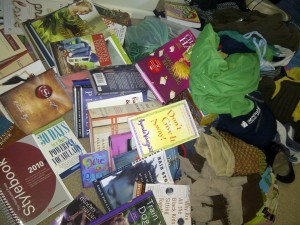 I didn’t have a job until my second semester in college.  I worked at the gym, earning a little money to spend here and there on fun stuff, like getting my nails done, going to the movies, joining student groups, or whatever (not beer). I didn’t absolutely need that job until my sophomore year of college when I started using a credit card.  Then, I had no choice to work to pay for the things I couldn’t afford.  And that was the beginning of the end.

It’s funny how the system works.  Before the new laws came into effect, credit card companies marketed credit cards to unsuspecting college students and gave them ridiculously high limits. Those college students would begin spending out of control to keep up with their richer, more materialistic peers.  Thus, the student would have no choice to work some crappy part-time job to pay for the monthly bill for the stuff they couldn’t afford.  They were told as long as they paid their bills on time, their credit would be great.  They were told they needed those credit cards to build credit, so one day they could buy a house or a car, or some big expensive item after they graduated.

But if the student “needed” a credit card in college, just to maintain an active social life, he/she probably also needed student loans just to go to college. So by the time the student graduated, they would have amassed a fair amount of credit card debt on top of an enormous student loan debt, and be slaves to paying back all of the borrowed money. We would be forever have to work a job instead of becoming competition to the big companies out there, which would in the end keep the markets fair.

Instead of spending our free time in college developing business ideas, working on our craft, networking and building a freelance client base, we spent time at stupid, mindless part-time jobs where we answered stupid questions, and wore stupid uniforms.   It never mattered what ideas we had or what we wanted to do, we had to pay back all the money we owed.

It’s kind of like Feudal System of Medieval Europe, where peasants couldn’t afford their own land so they had to work for the lords and pay a hefty tithe to the church, tax to the government  and rent to their lords. This would forever perpetuate their poverty; they could never get ahead because the peasants were always indebted to someone.  Sound familiar? (Why do you think we still have “landlords?”)

We all assumed there would be a job waiting for us when graduated; a place for us to become a cog on the wheel of endless work until retirement.  We all know how that ended up with the economy and all, so it has us playing with the debt monster even more frequently.

I’ve realized that my debt is due cause of a materialistic lifestyle. The only way to to be free to live the life I want, is to free myself from the chains of consumerism.  If I stop buying all of the things they want me to buy, and get rid of all the things I thought I needed, I will be well on my way to more free time.  Getting rid of everything, however, is a bit more complicated than just throwing it all in the trash.

I’d like to spend a considerable amount of time talking about how I plan on getting rid of things (like my forever-on-a-contract cell phone), but that my friends is for another day.

Until next time, have a great week.