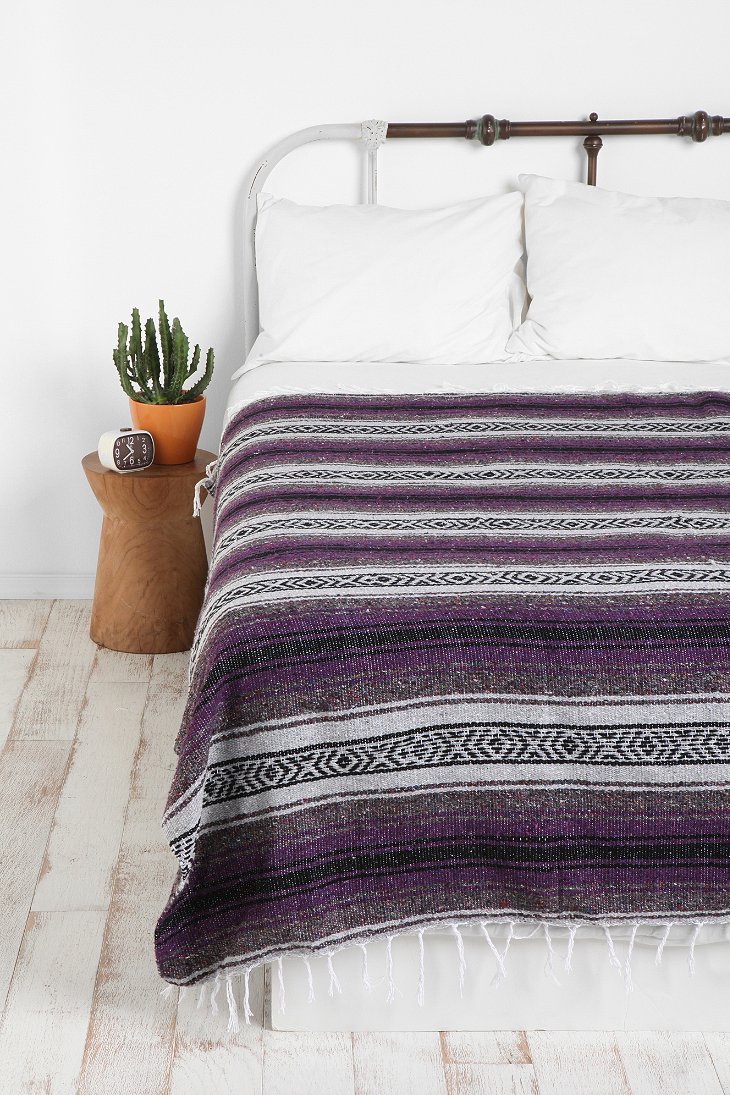 I spent most of Memorial Day weekend cleaning up and cleaning out.  I have accumulated way to much stuff, and I don’t want to have to take it all with me when I move in August.  I aim to attack the items that clutter the surfaces of my furniture and items that lurk unused in the recesses of my closet.

There are three categories of junk: Stuff that’s easy to toss because I don’t like, want, or care about it; stuff that is moderately difficult to toss because I feel guilty for some reason or another to give it away; and lastly, stuff that is usually broken, worn out, or no longer useful, but I keep it because it has meaning to me.  A purple, brown, and white woven Mexican blanket belongs in that last category for me.

I bought it at a rest stop between Raleigh, North Carolina and somewhere in central Florida, probably Leesburg. My youth group and I were on our way to one of our retreats (or rallies) on a charter bus.  I got to spend the weekend away from home, school and other teen responsibilities. I remember debating whether or not to purchase it, because 20 dollars was a lot back then, nearly a whole month’s allowance.  It smelled like straw and felt rough on my skin.  But the blanket was tradition, and I wanted to be a part of that tradition.  We called them “rally blankets.”

I’ve had the blanket for at least 10 years. The reason why I loved it so much was not just because it was my rally blanket.  I loved it because it kept me warm at night at rally when my sleeping bag wasn’t warm enough. It provided me comfort during vacations and a sense of familiarity when I went to college. The blanket could keep me warm, no matter where I was.

I feel ridiculous, because I’m 25 and I’m hung up on my blankey (security blanket). It was the best damn blanket I’ve ever owned and now it’s ruined. About a month ago, my dog was chewing on her toy while laying on the blanket and she chewed a hole right through.  Thinking it was unrepairable, I folded it, and put it away in

the linen closet. Immediately after, without a thought or hesitation, I bought a different color (red) replacement and have been using that one instead.

This past weekend I’d been attempting to repair items I’ve deemed unuseable until they are fixed.  I thought maybe, I could patch the blanket.  I crocheted a black square and attempted to sew it on.  It looked horrible. My next option would be to buy appropriate material and sew it on.  This was a very viable option except I realized doing so would defeat my whole purpose.  I would be spending more money, and in the end I would have two blankets.  That’s when I knew it was time to let go.  Whether it is going in the trash, donation, or for sale box, I don’t know.  Maybe I’ll fix it and donate it.  Maybe I’ll fix it and donate the new one. But I can’t keep both, and I won’t spend more money.  Maybe I can use cloth from one of the T-shirts I’m giving away. There is quite a lot of possibility in that 🙂  If my initial response wasn’t to go out and buy something new, I could have possibly repaired the old blanket, and I wouldn’t be in this predicament.

I read a great article about Letting Go of Sentimental Items.  It got me thinking about the blanket because of the memories that it represents. l always have the memory whether I have the item or not: I’ve written about the memory right here in this blog post.

The key to cleaning is to not buy more stuff, contrary to what the container store would have you believe. Over-organizing simply leads to more clutter. The key to keeping your space clutter free is to get rid of the old and not buying unnecessary things to replace them.  You have to ask yourself, do I need a new one? You probably want a new one, but do you need one?  You have to change the way you think about things.   Defeating the debt monster requires a change in thought and a change in action.  It requires slowing down. It requires abandoning the materialistic mindset. Because in the end, you may end up with more than you bargained for.