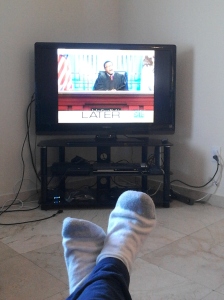 Actually, I love tv.  Remember how I went on and on about how cable is bad for you? That having cable is subjecting yourself to wasted time and wasted money? Well, apparently I’m a hypocrite.

About three months ago, (before we moved into this new apartment) my boyfriend and I seriously discussed whether or not we wanted cable.  I have to be honest, I enjoyed watching TV when I was staying at his place. It gave me something to do when I was bored. However, the cost for DirectTV wasn’t coming out of our pockets so it didn’t matter. TV was great- I got to watch True Blood– for free.

But when I lived with a roommate, I didn’t have cable for nearly a year and a half.  That worked really well for me.  Yes, I could procrastinate on Hulu or Netflix, but only to the extent my shows had new episodes. Outside of that, there was no mindless entertainment that I could subject myself to for hours on end.

I was very happy to continue that lifestyle in my new apartment. That was the plan: Internet yes, cable, no.

So, on move-in day, I sat for nearly 2 and a half hours watching a muted version of Cloudy with a Chance of Meatballs at the Comcast office while waiting to pick up our internet modem.  After eighty other patrons ahead of me got their business taken care of, the clerk nearly turned me away because the previous tenant at my address hadn’t paid their bill. After showing the clerk all sorts of documentation, speaking with a manager, and listening to the two speak about my problem in incomprehensible spanish, I was allowed to open a new account.  At this point, I was ready to go home. But oh! To my delight, the clerk informed me that TV service would be free because the condo association where I live was paying for it.  How could I turn away free cable? How could I say no, when my patience and courteous behavior was being rewarded with free cable? Good karma was coming back to me at a rapid pace, why would I turn it down?  So, I didn’t.

We had hardly moved in, but we managed to set up the internet and television. Watching  Adventure Time or Regular Show on Cartoon Network would have been the perfect unwinding activity for a long, and extremely stressful move.  So far, the internet worked great.  Television, however, would not activate. Nothing we did would get that sucker activated. Thus, we had to wait a week for Comcast to send a technician to the apartment.

The technician came, made the necessary repairs, and left.  Finally, we had TV!! Finally, I could numb my mind to the world of moving for a few hours.  Unfortunately, it wasn’t that simple. After turning the TV off, and back on again later, the cable was no longer activated.  The technician came back to our house and couldn’t fix it.  The only option remaining was to go back to the Comcast office and exchange the dang thing. This time, however, I was smart enough to go to a different Comcast office. The box was exchanged seamlessly.

At home, wetting up the new box had a few kinks. We had to talk with a customer service agent on the phone to get it set up instead of using their automated system, but we got it set up, finally.  I shouldn’t mention that Comcast charged us 30 bucks for the technician visit, so we did have to call them a month later to complain about the bill. Ever since then, our television service has been flawless.

And here I am, lamenting my decision to accept the free cable. It’s clear, that even when it’s free, cable is really not free. Yesterday, I watched four episodes of Bar Rescue, four episodes of 30 minute cartoons, two episodes of Sisterwives, and one episode Breaking Amish: The Shunning Truth Part 2. That’s like 9 hours of TV right there. Yes, I felt like I was coming down with pink eye yesterday, but there really is no excuse. That’s time I will never get back.  (and by the way, has anybody noticed that Hulu has autoplay as the default setting? I had it turned off for the longest and when they redesigned their site, autoplay was on again. If you aren’t right there at the computer to stop it, Hulu will play show after show just like you are watching TV. It’s like they want you to do nothing but watch all online TV all day.) This has been my life for the last week, it seems.

When I didn’t have cable at my house, I could only stand to watch an hour or two of TV. Now, I’ve become proficient at wasting a whole day. I’ve realized two things:

Number one: Watching TV has been making me very lazy.  The TV calls to me, sitting there so quietly and unused in the corner.  It imposes on my space and my thoughts. No matter where I am in the living area/kitchen, I can always see the 46 inch unit out of the corner of my eye. I feel like it ought to be used. Now that’s a problem. I can make all kinds of excuses like “I wouldn’t have been able to watch the presidential debates without TV,” but that bull****. They were broadcast live on YouTube.  I should have realized that the hassle to get the TV  set up should have been a cue to just let it go. Now, I just want the thing out of the house.

I wouldn’t mind having a smaller unit closed in a cabinet for movie watching purposes, or even for my shows that I can get online.  I still maintain that having a TV is a bad idea if you want to lead a productive life. I now have plans to get rid of TV, again, so I can go back to getting things done.

I’m out peoples!! Have a great week.